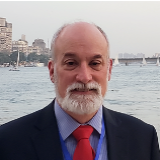 Paul Whitney, who has nearly 30 years of experience at Washington State University, was named Associate Vice President for the school’s Office of International Programs on April 24, 2017.

He has held several positions during his time in Pullman, including the senior associate dean for Research and Graduate Education in the College of Arts and Sciences since July 2012.

Whitney came to WSU in 1987 as an assistant professor and became a professor in 1998, a title he still holds. He was named Chair for the Department of Psychology in July 2000.

He served in that capacity until June 2012, when he accepted his most recent position with the College of Arts and Sciences.