By Kelly A. Newlon, PhD, Director of Global Learning

Kelly A. Newlon is the Director of Global Learning in the Office of International Programs at Washington State University. After studying abroad in the Czech Republic in 1995, Kelly continued to be passionate about the value of international travel as part of a student’s education and has led programs on all seven continents. 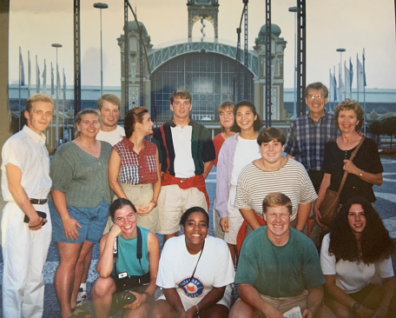 Last summer marked 25 years since I studied abroad between my freshman and sophomore year in the Czech Republic. Imagine this: I was in my second week at The Ohio State University and lost! I was trying to find my advisor’s office to declare my major, but it was in the far reaches of campus compared to my residence hall. I looked at a map and knew what intersections to turn which directions (this was pre-Siri). I got turned around but saw the study abroad office at one of the intersections. I cooked up a plan to tell them I was interested in a study abroad program so that I could get directions without admitting I was lost. On that day, I met the woman who would become my boss 12 years later! Before I walked out, she had me signed up to go to the Czech Republic the following summer. I had to go back to my room and call my parents to see if they were okay with it, and to see if my younger sister could show my heifer at the county fair the next summer.

Getting lost changed my life! The Czech Republic brochures had not been changed from Czechoslovakia yet and I didn’t even know how to say hello. Throwing myself into another culture that was unfamiliar to me, but with a structured support network such as study abroad provides, gave me a chance to learn about myself and about the world. I vividly remember writing a paper at the end of the program about all the things I thought were American being universal and the things I thought were universal being American. Music, style, movies, and even specific brands were available worldwide, but fundamental things like how animals were raised on farms were different. Email had just been invented and Google was a large set of encyclopedias on a shelf, so I had little opportunity to know what I was getting into. 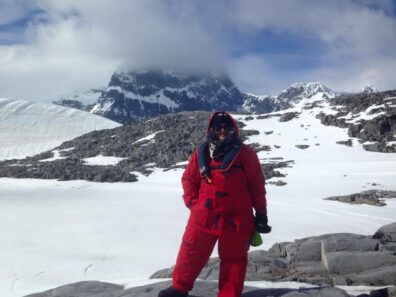 Even 25 years later, I am thankful for the happy accident I had of getting lost on campus. Through my time abroad, I also met a University Ambassador (tour guides at Ohio State) and taking part in that job opened the door for me to work in higher education. Eventually, my time working with students became an opportunity to lead in the field of education abroad. I like to have fun, but also have a passion for making a difference in the lives of young adults as they transition to adulthood. I have a chance to do that every day as the result of taking that leap, and by allowing myself to get lost. As of today, I have now traveled and led students to all seven continents, and through both personal and professional travels have visited 42 countries.

Clockwise from top left: Kelly, middle row second from right, with her study abroad group in Prague; Kelly hiking in Antarctica: Kelly at a rhino orphanage in South Africa 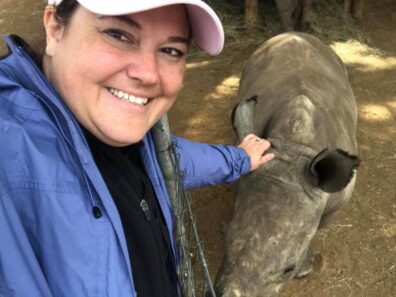