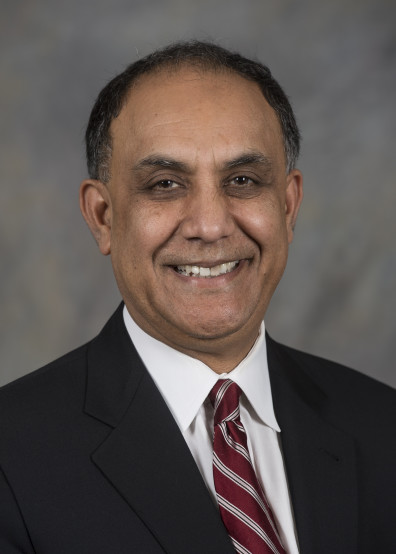 Ambassador Asif Chaudhry became the Vice President for International Programs (IP) at Washington State University in June 2015. He is the chief international relations officer at the University and is responsible for IP’s role in carrying out WSU’s mission of global engagement. Ambassador Chaudhry manages WSU’s extensive internationalization program that focuses on establishing strategic partnerships with governments and educational institutions across the globe.

Ambassador Chaudhry recently retired from the United States government as a Senior Foreign Service Officer where he held numerous leadership positions in the Departments of State, Defense and Agriculture. In his final assignment with the U.S. government, he was the Vice President of the Commodity Credit Corporation managing a $5.5 billion portfolio of credit guarantee programs to support expansion of exports of U.S. products.

In July 2014, Ambassador Chaudhry completed a 3-year assignment as the Foreign Policy Advisor to the Chief of United States Navy (CNO) at the Pentagon. During this assignment, he was the principal architect of U.S. Navy’s global engagement plan to implement President Obama’s policy of rebalance to the Asia Pacific region.

He was the U.S. Ambassador to the Republic of Moldova from 2008-11 where he led the implementation of numerous economic development and reform programs that put the country on a path of transformation to a true democracy and an Association Agreement with the European Union.

Prior to that assignment, Ambassador Chaudhry was the Deputy Administrator for the Office of Global Analysis at FAS (2006-08) leading the development of recommendations that formed part of the foundation of the U.S.-Korea free trade agreement. As Minister-Counselor for Agricultural Affairs at the U.S. Embassy in Cairo, Egypt (2002-06), he negotiated several trade agreements between the United States and five countries in the Middle East including Egypt, Israel, Jordan, Lebanon, and Syria.

During 1996-99, he served as Counselor for Agricultural Affairs at the U.S. Embassy in Moscow. There he led the implementation of a billion-dollar food aid program for the Russian Federation in response to the collapse of the financial sector of that country. As Attaché at the U.S. Embassy in Warsaw, Poland (1992-95), Ambassador Chaudhry oversaw the implementation of various USDA economic development programs to help transform the country from a centrally controlled system to a free market economy. Prior to joining the Foreign Service, he had a brief stint as a professor of Economics at Montana State University.

Ambassador Chaudhry received his Ph.D. in ag economics from Washington State University and a master’s degree from the American University of Beirut in Lebanon. He completed his undergraduate work at the University of Punjab in Pakistan. He speaks Russian, Arabic, Polish, Urdu, and Punjabi, and received a Presidential Meritorious Service Award for his contributions in the conduct of U.S. Foreign Policy. 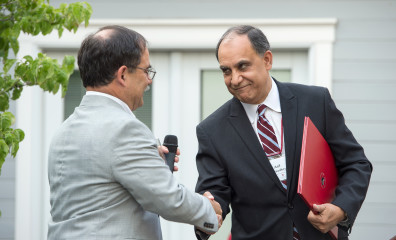 PULLMAN, Wash. – Asif J. Chaudhry – a career minister in the U.S. Senior Foreign Service and Washington State University’s new vice president for international programs – was honored Aug. 19 with the WSU Alumni Association (WSUAA) Alumni Achievement Award in recognition of his contributions to the betterment of our global society and his commitment to WSU.

His foreign service career has coincided with the demise of communism in Eastern Europe. He helped form a ministry of agriculture and extension centers in Poland; aided Russian negotiation for assistance in response to economic collapse; and assisted the Moldovan government as it enacted justice reforms and built infrastructure and best business practices.

There isn’t a country where Chaudhry has served that he has not promoted WSU to its citizens and his colleagues, according to WSU Interim President Dan Bernardo. Chaudhry is directly responsible, for example, for bringing Fulbright visiting scholar Boris Delimarschi from Moldova to the Pullman campus last year.

Chaudhry credits his WSU education for helping him grow from a youth in rural Pakistan to an international diplomat: “The quality of education I received laid a great foundation for me to have the confidence to go and do what I’ve been doing,” he said in a 2013 interview with Washington State Magazine.

As a result, he encourages and offers mentoring to WSU students who show interest in working in professions that represent the United States and WSU, Bernardo said.

Chaudhry most recently was foreign policy advisor to the U.S. Chief of Naval Operations. Before that, he was U.S. ambassador to Moldova. He served in the U.S. Foreign Agricultural Service, U.S. Department of Agriculture (USDA) and U.S. embassies in Egypt, Russia and Poland.
He received the U.S. Presidential Award for Meritorious Service for foreign policy in 2006 and has received three certificates of merit and three administrator’s special awards from the USDA.

The WSUAA Alumni Achievement Award was created in 1970 by the WSUAA Board of Directors to recognize alumni who have given outstanding service to WSU and made contributions to their professions and communities. The award is the highest honor bestowed by the Alumni Association. Of an estimated 250,000 students who have attended WSU, Chaudhry is the 517th Alumni Achievement Award recipient.