PULLMAN, Wash. – Paul Whitney, who has nearly 30 years of experience at Washington State University, has been named Associate Vice President for the school’s Office of International Programs.

He has held several positions during his time in Pullman, including the Senior Associate Dean for Research and Graduate Education in the College of Arts & Sciences since July, 2012.

“Paul’s multi-disciplinary background and commitment to making WSU a powerhouse international research institution is the exact recipe for greatness at our University,” Vice President for International Programs Asif Chaudhry said. He will be an invaluable part of our team. He is very well connected throughout all colleges and campuses throughout the WSU system, and he shares my vision of increasing our global footprint.”

Whitney came to WSU in 1987 as an assistant professor and became a professor in 1998, a title he still holds. He was named Chair for the Department of Psychology in July, 2000.

He served in that capacity until June, 2012, when he accepted his most recent position with the College of Arts & Sciences.

“I am excited and honored to be joining the outstanding International Programs team,” Whitney said. “It has never been more important to bring an international perspective to WSU students, and for the University to increase its education, research, and outreach impact worldwide. Great universities are globally connected. I welcome the opportunity to help WSU students and faculty work to make us a more globally connected institution.”

Whitney will begin his work in International Programs, May 1.

VANCOUVER, Wash. – Henri Burns, a doctoral student in the mathematics and science education program at WSU Vancouver’s College of Education, has been chosen by the National Association for Research in Science Teaching (NARST) to take part in five-day workshop in Taiwan this summer.

Burns, who is doing her studies at WSU Vancouver, is one of only 36 graduate students worldwide chosen for the Sandra K. Abell Research Institute for Doctoral Students.

Burns’ dissertation advisor Kristen Lesseig said Burns’ research is timely and has potential to make a significant contribution in terms of broadening participation in STEM education.

“Her research is focused on the impact that engineering design lessons, which include a strong emphasis on empathy, can have on the interest middle school girls have in engineering” Lesseig said.

NARST noted in its media release: “This Institute will offer doctoral student participants from around the world opportunities to build a global community of science education scholars, not only among the students, but also with internationally renowned scholars, as well as the NTNU community.”

In addition to acceptance into the program, Burns also receives funding to support her attendance and travel. 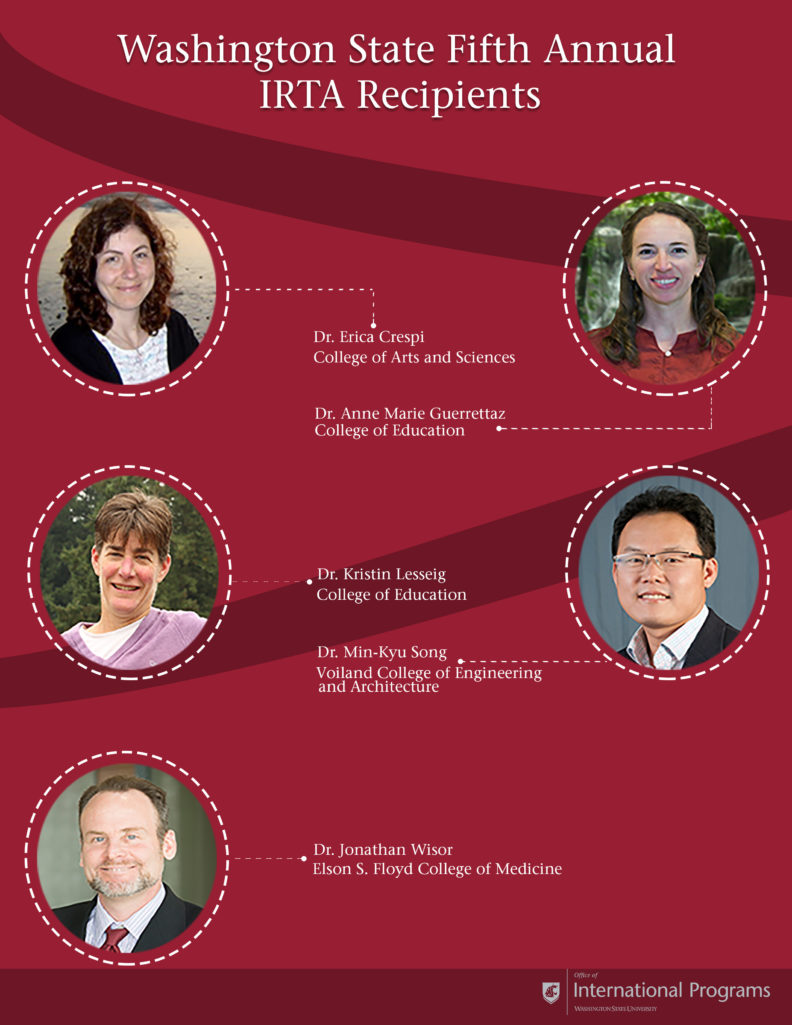 Each award winner receives $2,000 to $5,000 in order to assist in the promotion and strengthening of international research collaborations. Current, full-time WSU faculty members who submitted an application that met the IRTA guidelines were eligible for the award.

“Each recipient has shown leadership in their respective areas and is either conducting or has shown great interest in exploring possibilities for collaborative research that addresses at least one of the strategically targeted areas of research known as the ‘grand challenges’ at WSU,” WSU Vice President for International Programs Asif Chaudhry said. “This type of work is vital to our success as a global institution.”

WSU Vice President for Research Chris Keane added, “It is great to see WSU’s research strengths so well represented by this year’s diverse set of winners. They demonstrate the solutions WSU research can offer to a wide variety of global challenges.”

WSU’s IALC was established in 1984 on the Pullman campus with the goal to teach English as a second language and prepare international students to study at U.S. colleges and universities.

IALC sessions at WSU Tri-Cities will begin in January and enrollment is already open for students.

“Establishing a language training center at WSU Tri-Cities is a great example of how we want to globalize our efforts through the University system-wide,” said Asif Chaudhry, Vice President for International Programs. “I want to thank Dr. Chris Meiers and Dr. Kate Hellmann for their hard work and dedication to making this project a reality. We at Washington State University take pride in helping to prepare our students to succeed in a global marketplace.”

Hellmann, the IALC Director, added, “The IALC in Tri-Cities will facilitate the internationalization of WSU while preparing students to academically succeed and matriculate to WSU. We are one of the top programs in the country recognized by NAFSA: Association of International Educators.”

This expansion marks the first time WSU will offer a language center on multiple campuses in its system.

“We are extremely pleased to bring the highly-regarded Intensive American Language Center to the WSU Tri-Cities campus,” said Meiers, WSU Tri-Cities Vice Chancellor for Enrollment Management & Student Services. “This partnership is a critical element to the campus globalization efforts and will provide numerous cultural and economic benefits to the mid-Columbia region.”

The award recognizes top undergraduate and graduate students who are participants of and/or employed by the Department of Recreational Sports and gives NIRSA an opportunity to honor outstanding student leaders who are active participants, employees, and/or volunteers at their institution.

Gale will be recognized at NIRSA’s annual conference in National Harbor, Md., next February.

America exports far more than agricultural commodities when it engages in trade relationships around the world. It also spreads freedom of speech and religion, personal opportunity and prosperity, blessings that are cherished and celebrated during the holiday season, according to a former Foreign Agricultural Service officer and ambassador who presented the keynote address at Colorado Farm Bureau’s recent annual convention.

Now vice president of international programs at Washington State University, Asif Chaudhry reflected on his wide-ranging career, the awe he felt the day he was sworn in as U.S. ambassador and his memories growing up poor in rural Pakistan.

“That I am standing in front of you today, it really is a miracle,” he said. “My wife calls me a National Geographic kid. I am one of your charity cases, and you have been very kind to me.”

“It is nothing short of a miracle and that miracle is only possible in the United States,” he continued. “When I came here, I came with nothing – enough money for one semester of college and nothing more. I ate yogurt with bread; that was my dinner. That’s what’s motivated me to go out and do some of the things I’ve done.”

Chaudhry has held a variety of assignments around the world, helping other nations improve their economies and living standards, from Russia to the Middle East.

In post-World War II Poland, he helped establish a farm extension service and a modern grading system, fueling what was to become one of the most vibrant ag sectors in today’s European Union.

In the late 1990s, following the economic collapse of the Soviet Union, he helped distribute U.S. food aid in such a way that it helped to shore up the bankrupt pension system, which had left retirees six months behind on payments. The move altered perceptions of the U.S. among the Soviet people and ultimately led to a personal meeting between Chaudhry and then-Soviet President Mikhail Gorbachev.

“The U.S. was exporting $1.3 billion worth of products to them at that time. Agriculture was in fact exporting more products there than Boeing Aircraft,” he said. “All of that was shut down (when the economy collapsed.) We proposed giving them economic assistance equal to what we’d lost (in trade), and we got that program approved.”

The most humbling moment of Chaudhry’s career occurred when former President George W. Bush tapped him to be U.S. ambassador to the Eastern European republic of Muldova, a plum appointment that came as a “total surprise.”

At the time, Muldova had been a democracy for 20 years, but was still under Communist rule. Part of Chaudhry’s role was to educate people about the functioning of a true democracy. Within 18 months of landing the assignment, he watched as four new political parties were able to wrest majority control away from the Communists in a free and fair election. Chaudhry emphasized that U.S. trade is about more than selling commodities, and the U.S. military (which he served in an advisory capacity at one point) exists to do much more than fight in world conflicts.

One concern he did express is the need for the U.S. to take a stronger stand against aggression, such as Russia’s occupation of Crimea and Ukraine and North Korea’s threats to the Korean border, which he described as “the most sobering thing you can see.”

“That we did not have a more of united front against the Ukrainian situation is going to haunt us for a very long time,” he said.

Scrutiny of trade and world relations has intensified following the November election, during which Donald J. Trump pulled off a stunning upset to win the presidency. In fiery campaign rhetoric, Trump vowed to re-negotiate existing trade agreements, pull the plug on the Trans-Pacific Partnership and even went so far as to suggest dismantling the World Trade Organization.

Trade advocates, farmers and many Republican legislators have chosen to remain cautiously optimistic about what a new Trump administration portends.

“We just hope they’ll show support for agriculture, and for what we do, and recognize that trade helps other markets around the world as well as our own,” said Chad Musick, of Longmont, who is vice chairman of CFB’s Young Farmers and Ranchers committee.

“Trade has been our biggest success story,” added Carlyle Currier, a rancher from Molina, who serves on the board of the U.S. Meat Export Federation and is also CFB’s vice president. “I think there’s potential (with the new administration) to keep increasing those opportunities around the world.”

Brent Boydston, CFB’s vice president of public policy, said losing forward momentum on TPP was a blow. Countries that fall within the 12-member pact contribute a quarter of a billion dollars of positive trade impact just in Colorado alone, he said.

The goal of the agreement was to increase market access in countries like Japan and Vietnam, which he said represent important growth potential.

“I was with a group in D.C. this spring that went to visit the Vietnamese embassy, and they made no secret about how much they want U.S. ag products,” said Boydston, who will be leaving the CFB staff in December to take an industry affairs position with Monsanto.

PULLMAN, Wash. – Lysandra Perez, a Washington State University sophomore in psychology from Yakima, Wash., has received a Benjamin A. Gilman International Scholarship from the U.S. Department of State to study abroad in Italy in the spring.

“Lysandra’s experiences in Italy will add to the breadth and depth of her education as well as help her grow personally and professionally,” said April Seehafer, director of the distinguished scholarships program, part of WSU Undergraduate Education. “WSU can be very proud that she is our 55th recipient of the nationally competitive Gilman scholarship.”

Launched in 2001, the award grants students understanding of other cultures, countries, languages and economies to prepare them to assume leadership roles in government and the private sector and to thrive in the global economy. Perez is one of more than 850 undergraduates from 359 U.S. colleges and universities granted up to $5,000 for spring 2017 study abroad. She is one of five WSU students to apply for the award.